The differences between a 3X scope and a Red dot are quite significant in that the former illuminates objects to appear three times larger than their original size. Red dots on the other hand does not magnify but places the target and the reticle on almost the same optical plane enabling a single point of focus.

The advantage of magnifiers over red dots is quite obvious given that achieving accurate shots towards smaller targets that are at a further distance is at times hard, especially if you are not using a magnifier. However, there are sights that can allow you to shoot from point-blank to about 500 yards without using a magnifier. The Aimpoint 3x Mag and the Aimpoint Pro red dot are great precision optics but perform quite differently, let’s find out how.

What are the differences between the 3X Scope and the Red dot?

3x Scope vs. Red- How do they compare?

Red dots are normally limited when it comes to magnification but are easy to aim and accurate when taking a shot, the Aimpoint pro red dot reflex sight is, therefore, a 1x magnification, and is known to improve sighting by doubling the size of your target. Aimpoint 3x scope is, therefore, highly efficient when compared to the Aimpoint red dot, first because it has enhanced magnification of up to 3X and a large objective diameter of about 25mm.

At 3x magnification, the scope increases the effective distance to 300-350 yards, which will then enable you to take out your prey swiftly even if they are in motion. The objective lens also plays an important part in magnification, as it enables enough light to penetrate, in essence, therefore, is that the larger the diameter of your objective lens, the better the performance of your optics.

The Aimpoint 3x scope is therefore the better unit because it offers enhanced magnification, and the incorporated large objective diameter ensures that you are provided with high-resolution images.

The 3x scope is lacking in this area you, however, get the 3X magnification and an enhanced objective diameter. Keep in mind also that the for as much as the red dot might be sufficiently used as a single unit it is also possible to pair it up with the 3x magnification scope, and all you have to do is find a swing mount, which will allow you flip it up and down during use.

The Aimpoint red dot scope is way bulkier thanks to the external features which help to enhance its functionality. So, some of the functional features are such as the flip caps at the back and the front of the sight, which help protect the glass and lenses when the device is not in use.

We also have the small battery compartment for powering the sight, there is the removable spacer used to allow users to achieve a comfortable scope height and then the modular mount that can integrate with at least 3 different weapons and these are the AR 15, the M16 rifles and the M4 Carbine.

For the 3x scope for one, it weighs only 200g inclusive of the protective rubber and has no functionality features protruding from the sides. The scope, however, has a large objective diameter which could say contributes a lot to its weight, the mid part is also weight at 1.7 inches in length.

So if we are to focus specifically in build and design which contributes to the overall weight of the sight then the Aimpoint 3X scope is the best, and many shooters would prefer to use it because the low weight will make shooting effortless in terms of aiming and transitioning from one target to another. 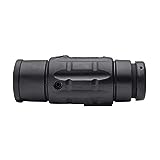 The only major downside with the Aimpoint 3X scope is that it doesn’t come with a mount, asides from that users will be furnished with the high resolution 3x magnification lens. The unit can additionally double up as a handheld 3X monocular and even better is that you wouldn’t need to re-zero when you shift between magnified and non-magnified aiming.

The build and design of the scope is quite compact with features that enable grip when used as a handheld observation tool. Materials used in manufacture enhance the magnifier’s life span and is, therefore, shockproof and waterproof and can be submerged up to 67 ft. 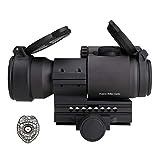 We are noting that you might have to get a separate magnifier to use with this unit if you are after precision target acquisition. The unit comes incorporated with a durable battery that will give you service of up to 3years; it is additionally versatile and can, therefore, be used with all the generations of the night vision devices, including all the Aimpoint 3x magnifiers.

Customization has been enabled through the spacer, and you can either use it or remove it to achieve the aiming height of your choice. The hard-anodized aluminum alloy housing makes the red dot adaptable in dynamic environments, and makes the product durable, what’s more, is that it can be submerged in water up to 150 ft, thus very versatile.

For as much as the 3X Scope and the red dot are independent units capable of functioning individually, they can be used as a pair with the magnifier set behind the red dot scope for enhanced vision enabling accurate target acquisition.

Final Verdict: So which is better the 3X scope or the Red Dot?

The Aimpoint pro red dot is the better unit simply because it can be used both in the day and at night, and for the above, you have been provided with up to 10 levels of brightness settings, four of which have been dedicated to night vision. For the 3X scope, it’s more about light and for that, you have a large objective lens.

The Aimpoint pro red dot is a good choice for hunting, more especially if the prey is fast and close

If you are going to use the Aimpoint 3X magnifier, then you will have to mount it behind the red dot and enjoy long-range aiming or observation.