Are you looking for a quicker way to achieve target acquisition, simpler 100-yard shots, or a better hand in low-light environments? Then what you need is a red dot sight for your pistol. Burris Fastfire 3 as well as the RMR model from Trijicon are one of the favourites amongst shooters.

The Trijicon industry as well as the Burris are major forces in the gun market. Both of these formidable industries create high-quality products such as the Burris Fastfire 3 and the Trijicon RMR red dots. These optics are of very high standards with superior features guaranteed to benefit all types of shooters. As a hunter, some of the most important features that I focus on includes the product’s specs and quality. This allows me to select the most suitable red dot for all my shooting activities.

Burris Fastfire 3 vs Trijicon RMR – How do They Compare?

Once you put both units’ side by side, you will notice that the Trijicon RMR 3.25 is much smaller, lightweight, and compact than the Burris Fastfire 3. The much smaller dimensions of the Trijicon reflex sight come in handy as it allows the unit to work well with smaller pistols and firearms.

The Burris Fastfire 3 unit can also be placed on a pistol. Users will not be presented with any problem when mounting either one of the sights on the rail of a shotgun or a rifle. The larger measurements of the Burris FastFire and the fact that it is compatible with all types of rifles and shotguns makes it more ideal than the RMR sight.

The Trijicon RMR sight is designed with a very durable build. Its housing is constructed from a molded 7075-T6 aluminum material. This unit’s shape is patented in such a way that the impact and the force from the lens are deflected. Trijicon ensures that the sight remains strong and durable. Many users, however, have complained about the sight breaking down because the internal design is not the best.

The housing of the Burris FastFire 3 model is also very strong and durable. It is small in size and comes with many modes. Fastfire’s build and design makes it very easy to use and the target acquisition is very quick. When it comes to quality the excellent build of Burris Fast fire 3 model it proves to be a preferable option than Trijicon RMR.

The Trijicon unit is designed with a 3.25 MOA red dot. This reticle is nice ensuring that users get to benefit from a precise and fast target acquisition function. The Burris Fastfire 3 is designed with two different variants. There is a 3 MOA dot as well as an 8 MOA red dot. The much larger reticle comes in handy when dealing with shotguns and close-quarter combats. If you need to work with a greater level of accuracy, you should work with a much smaller reticle. The Burris Fastfire 3 red dot is much brighter than the Trijicon model.  This allows you to easily and quickly spot the dot even on a bright day making the Burris Fastfire 3 a lot more beneficial than the Trijicon model. 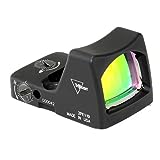 This Trijicon RMR sight is specially designed to provide you with simple illumination controls. It is a key factor that should be considered when hunting in different kinds of conditions. Users get to make use of the buttons, allowing them to maneuver between automatic to manual. Illumination brightness can also be modified and the RMR can be powered down.

By using the manual mode, you can manage the optics for over 16 hours. As soon as you restart the sight, the optics will come on in automatic mode. Trijicon model can also work well with night vision optics.

This red dot weighs 1.2 ounces. Its battery is situated right under the sight, therefore when you want to disassemble the unit, all you need to do is replace the battery. RMR is manufactured from forged aluminum material and constructed with a tough anodized coating. 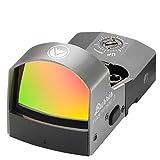 This red dot is one of the most affordable options and it is also very reliable. Its glass is nice and green providing users with an amazing large view. Fastfire is designed with just a single button that maneuvers through 4 different settings. That includes the off button as well as 3 brightness settings. These are ample for hunters who make use of night vision optics. There is also the auto-adjustment function that you can use to turn off or on.

Fastfire’s battery life can last for up to 5 years. Its unit also has an auto turnoff function that operates after 9 hours. You should make use of this. It is perfect on the surface as your battery will not die, even if you fail to put it off. It is compatible with a variety of shotguns and rifles and a great fit for hunting activities or competitions. Burris industry provides users with a forever warranty making it one of the most popular models in the industry.

Verdict: So which one is better –  Burris Fastfire 3 or Trijicon RMR

Burris Fastfire 3 sight is a better choice than the Trijicon RMR. This is because it is more dependable. The quality of the construction is a lot more ideal and you get to make use of a full lifetime warranty. This red dot produces an image that is clear, bright, and great.

With a red dot sight, you can be assured that the position of your head will not compromise the accuracy of the red dot sight. The parallax, however, comes up once the hunter starts to move at a closer range.

RMR is an abbreviation of the term Ruggedized Miniature Reflex Sight. The RMR is modified from ACOG that stands for Advanced Combat Optical Gunsight.

Sightmark Wolverine Csr Vs Fsr- which of the two offers the...