Sightmark seems to have narrowed its scope to law enforcement providing them with the best red dot sights that can be used in both the cool and extreme weather conditions without compromising on the field of view or fogging up.

And if you are looking to achieve precise shooting and durability, sightmark has put out two red dot sights, the sightmark wolverine Csr and the Fsr, that retail at a fair price not exceeding $200. Both units boast of different levels of brightness settings, the best eye relief, the outer part features a matte finish rubber casing designed to protect the Aircraft aluminum grade construction that helps increase durability while maximizing on alignment for better accuracy.

What are the differences between Sightmark Wolverine Csr and Fsr

Sightmark Wolverine Csr vs. Fsr- How do they compare?

The sightmark Wolverine Csr and Fsr red dots have both been equipped with scratch-resistant anti-reflective lens coating for glass protection, but with significant differences in performance in that the Fsr features a 2 MOA red dot reticle known to obtain an excellent balance between speed and precision. When using the Fsr, the user will, therefore, be able to distinguish between targets quickly and easily while achieving up to 2 inches of the target at 100 yards.

The Wolverine Csr on the other hand boasts of a 4MOA red dot reticle relevant for fast sight acquisition. Most hunters using the handgun or the individuals who are more interested in target shooting prefer the 4MOA because it enables them to acquire a target fast and at a closer range. In essence, therefore, is that bigger dots offer the best precision.

When it comes to objective diameters the larger it is the better, because it will have greater light-collecting power, which consequently results in the red dot providing higher resolution and a brighter image.  The optical performance of the two red dots is impeccable however; the Fsr offers the best performance thanks to the incorporated 28mm objective lens that enables a higher resolution and a brighter image.

The design and build of both the Csr and Fsr are almost similar from the tethered caps that are easy to open without the fear of losing them while in the field; both units pose a single piece tube durable Aircraft aluminum construction, the rugged construction makes the red dots shockproof and can, therefore, withstand various levels of impact and be used in areas with extreme temperatures.

Still, on construction, there is a subtle difference, and for as much as the red dots are waterproof, shockproof and fog proof the Sightmark Wolverine Fsr is equipped with a 28mm objective lens, which makes it a whole lot bulkier but nonetheless functional. The Csr objective lens is 23mm which makes the overall unit light in weight and easy to move as you transition from one target to another.

Both the wolverine Csr and Fsr have rugged construction and build, but the Fsr we must note is way heavier than the Csr meaning that during use, you will feel the extra weight, with the above in mind the Csr has a better construction because it comes incorporated with an easy to handle lightweight.

Sightmark Wolverine Fsr is way heavier and bulkier at 12.3oz when compared to the wolverine Csr which weights a mere 10.3oz, so given that enthusiasts prefer a unit that has shaved off a couple of pounds despite incorporating new advanced features, then the Csr is the more preferred unit, as it facilitates ease in operability as regards lifting or during transitioning from one point to another while working in a dynamic environment.

The Wolverine Csr is an efficient red dot that retails at a budget-friendly price; the unit comes equipped with the 4MOA red dot reticle known to afford the perfect balance between engaging targets that are at a distance but with accurate precision. The 4MOA red dot is, therefore, perfect for individuals who have difficulties with the smaller 2MOA dots.

At 10.3 oz the unit is light in weight making it easy to aim and make precise shots in a dynamic environment, and the adjustable mount height allows users to customize the height of the red dot. And with an IP67 waterproof rating, the Sightmark Wolverine Csr red dot will remain functional even after being submerged in water. Temperatures changes do not alter the performance of the red dot ensure, however, that it ranges between -22° to 122°F. 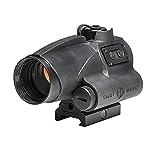 The Sightmark Wolverine Fsr is a big red dot but with good reason, the unit’s objective lens has a large diameter at 28mm which allows a lot of light to enter the unit, and you can, therefore, expect to be furnished with brighter images. The unit is versatile and can, therefore, come in handy for use with the night vision devices as it is night vision compatible.

And apart from the single tube Aircraft aluminum grade material used in its construction, the incorporated glass is not as sensitive thanks to the scratch-resistant anti-reflective lens coating. The above makes using the red dot in dynamic environments a breeze. And with a single AA battery, the red dot offers an enviable a million hours when used in low setting, with 6 years of continuous use on a 6 setting.

Sightmark Wolverine Csr and Fsr don’t have many differences but if you are interested in a larger dot then the Csr will suffice but if you are into precision then the 28mm objective lens should suffice and which you will find in the FSR.

Final Verdict: So which is better between the Sightmark Wolverine Csr or the Fsr red dot sights?

The Sightmark wolverine Csr is the better unit because it is considerably light in weight offers up to 10 levels of brightness adjustments and comes equipped with a 4MOA red dot reticle which will offer a shot displacement dispersion of 4 inches at 100 yards. 4MOA covers a large area and can cover up to 8 inches in diameter at just 200 yards.

Well for one the unit has a small dot thus easy to sight; the sights are additionally small enough a feature that gives room for the backup sights.

The sightmark wolverine Csr is a 4MOA dot perfect for close-range shooting.

Sightmark Wolverine Csr Vs Fsr- which of the two offers the...